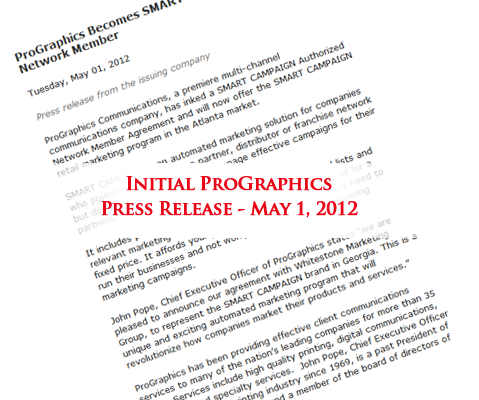 By WBD Admin on March 29, 2013 • ( Leave a comment )
Whitestone Marketing Group, LLC (“Whitestone”), sued ProGraphics Communications, LLC (“ProGraphics”), for federal and common law trademark infringement, false designation of origin and misrepresentation in commerce, false advertising, unfair competition, dilution, and misappropriation.
Whitestone creates marketing campaigns for independent retail outlets based on commonality of products from a single supplier.  The marketing program is an automated, multi-channel, direct approach without requiring input from local store owners.  Whitestone named its marketing program “Smart Campaign,” which is registered at U.S. Trademark Reg. No. 3,701,066 and provides three discrete levels of service – Silver, Gold, and Platinum.
The complaint asserts that ProGraphics, a commercial printer, sought Whitestone’s services in or about May 2012, to develop a direct marking program for a manufacturer of picture frames to individual stores.  The customer allegedly decided to test the program for its 2,700 individual stores after seeing a Whitestone PowerPoint presentation made by ProGraphics.  Whitestone alleges that it was to provide the direct marketing consultation services for the customer, and that ProGraphics announced the arrangement in a Press Release on May 1, 2012.

The case is Whitestone Marketing Group, LLC v. ProGraphics Communications, LLC, No. 1:13-cv-00708-SCJ filed on March 5, 2013, in the United States District Court for the Northern District of Georgia, Atlanta Division, and has been assigned to U.S. District Judge Steve C. Jones.