The ‘170 Patent covers systems used “to measure various parameters relating to antennas used in wireless devices.”  P. 2.  The system uses the same array of probes to obtain multiple measurements by rotating the probes or the antenna to achieve different perspectives.  One of Plaintiffs’ devices is depicted below: 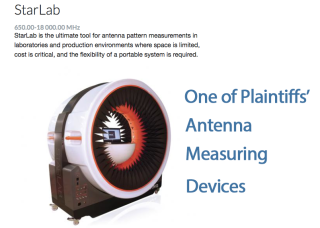 [i] Although only Claim 12 was in dispute.  The Court looked at all the claims to see if their wording informed the correct finding.
[ii] Given the Court’s multiple references to a “given pitch” or “set pitch,” it is interesting to note that the Court’s ultimate construction required fixed positions but included no requirement of a symmetry of pitch in the locations.