The complaint alleges that K2 informed Guardian on May 13, 2011 that its Aquaball anti-microbial humidifier cleaning cartridge infringed the ‘759 Patent.  Pictured below on the left is Figure 1 from the ‘759 Patent, with the Aquaball product of Guardian pictured on the right.

K2 further alleges that an additional infringing product was later introduced under the name Aquastick – pictured below: 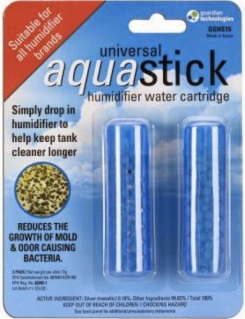 The complaint alleges that in addition to its active infringement, Guardian has induced others to infringe the ‘759 Patent and contributed to the infringement of that patent by others.  K2 seeks an injunction, an accounting, damages including the trebling of damages and a declaration that the case is exceptional under 35 U.S.C. § 285 together with an award of attorneys’ fees, costs, and expenses.
The case is K2 Concepts, Inc. v. Guardian Technologies, LLC, No. 1:14-cv-03348, filed in the U.S. District Court for the Northern District of Georgia on October 17, 2014, and assigned to U.S. District Judge Thomas W. Thrash, Jr.