TransCardiac seeks to invoke the presumption of O.C.G.A. § 24-14-23 to prevent defendants from denying factual representations contained in lengthy letters sent to them to which they did not respond.
Although TransCardiac identifies the patents it holds pursuant to a release from Emory with reservations for a 2% royalty, it basically alleges that Emory and the other defendants have set up a new company – Apica Cardiovascular Technologies, Inc. (“Apica”) – using the TransCardiac intellectual property to entice investors while falsely claiming ownership of TransCardiac’s technology.
TransCardiac paints a detailed mural of facts to which it asserts the defendants have feigned ignorance[2] and remained intentionally unresponsive to the detailed information provided to them in order to produce a “‘spun’ defense . . . required in response to litigation.”  Paragraph 169.
The defendants have taken a different path, filing three separate Motions for More Definite Statement on October 1, 2013, arguing that TransCardiac’s complaint is a classic example of a “Shotgun Pleading” where “a long factual section full of immaterial and often scandalous claims … [is] incorporated in full to each count.”  See, e.g., Georgia Tech Brief in Support at page 9.  The Georgia Tech Defendants, for example, cite Burch v. Baker, Civ. Action No. CV-11-S-3770-NW, 2013 WL 24017, at *3 (N.D. Ala. January 2, 2013), for the position “when a complaint takes the form of a ‘shotgun pleading,’ the defendant is not required to submit a responsive pleading [but] is encouraged-in fact, expected-to move for a more definite statement.”  Georgia Tech Brief in Support at page 8.
It appears that, while a fairly comprehensive timeline of events with supportive documents and testimony has been assembled and presented by TransCardiac, the specific facts so described have not been differentiated as to the 9 Counts asserted of Breach of Contract Written Contract, Breach of Oral Contract, Breach of Duty of Confidential Relations, Tortious Interference with Contract, Breach of Legal Duties and Contract, Fraud, Conspiracy, False Advertising, Expenses of Litigation, and Punitive Damages.
Pending the filing of responses to the Motions for a More Definite Statement, TransCardiac has moved to remand the case to the State Court of Fulton County on October 14, 2013, based in part on the requirement that actions asserting torts against state agencies be brought in the state courts of Georgia where the damage from the tort was incurred.  TransCardiac relies on the Eleventh Amendment and specifically Principality of Monaco v. Mississippi, 292 U.S. 313, 322 (1934) (“although a case may arise under the Constitution and laws of the United States, the judicial power does not extend to it if the suit is sought to be prosecuted against a State, without her consent, by one of her own citizens”) and Gouch v. Cal. Franchise Tax Bd., 2009 U.S. Dist. LEXIS 84023 (N.D. Ga. 2009) (“[S]uits in federal court against a state or its agencies by a citizen of its own or another state are barred.”).
As TransCardiac points out in its motion, the Attorney General of Georgia has filed an answer on behalf of two of the three individual defendants (Yoganathan and Jiminez), challenging the jurisdiction of the federal court, invoking the Georgia Tort Claims Act, and asserting sovereign immunity.
In arguing for remand, TransCardiac stressed the Four-Part test originally set forth in Grable & Sons Metal Prods. v. Darue Eng’g & Mfg., 545 U.S. 308, 313-314 (2005).  Gunn v. Minton, 133 S. Ct. 1059, 1065 (2013), summarized those elements as a federal issue if “(1) necessarily raised, (2) actually disputed, (3) substantial, and (4) capable of resolution in federal court without disrupting the federal-state balance approved by Congress.”
Thus, the District Court is presented with the irresistible force or unstoppable force paradox[3] – Georgia state courts must decide the case and federal courts must decide the case.  Or will the Court fashion a solution that neither party has sought – severing the case in Solomon-like fashion to let the state courts administer the litigation as it relates to state claims and the federal court administer the “essential” patent law aspects of the case.
The case is TransCardiac Therapeutics, Inc. v. Ajit Yoganathan, Ph.D., Jorge H. Jiminez, Ph.D., Vinod H. Thourani, M.D., Emory University, Georgia Tech Research Corporation, and Georgia Tech Foundation, Inc., No. 1:13-cv-03089-AT, removed 09/16/13 to the U.S. District Court for the Northern District of Georgia, Atlanta Division, assigned to U.S. District Judge Amy Totenberg.
[1] The 11th Circuit recently found patent law not to be an essential element in a contract case in which the Court actually construed patent claims.  See our blog post of July 29, 2013, at http://georgiaiplit.blogspot.com/2013/07/11th-circuit-retains-jurisdiction-in.html
[2] According to the complaint Defendants Thourani and Yoganathan became a member of the Transcardiac Therapeutics LLC Scientific Board and Yoganathan never resigned from that position and thus knew the TransCardiac technology intimately.
[3] A Greek mythological example of this paradox was the Teumessian fox, a huge ferocious fox, which could never be caught and which fed on the children of Thebes.  Cephalus sought to save the children by employing the magical dog, Laelaps, which was empowered by the gods to catch everything it hunted.   Zeus solved the paradox by turning both animals to stone and casting them into the stars.  Judge Totenberg may be no less creative.  More information can be found on these great and ancient creatures at http://en.wikipedia.org/wiki/Teumessian_fox or http://en.wikipedia.org/wiki/Laelaps_(mythology). 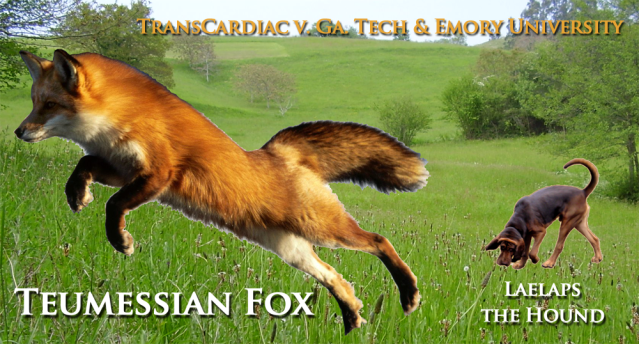